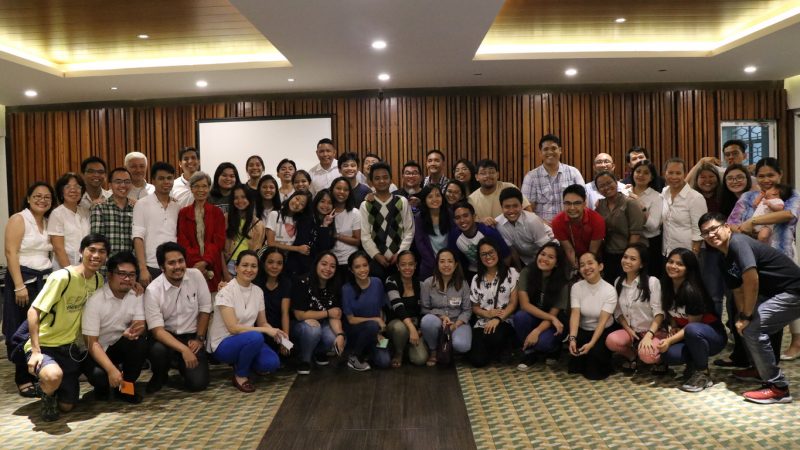 As a region, Metro Manila has developed uniquely and plays a peculiar role in the national movement. Our stakeholders – students, graduates, volunteers, partners, and staff – gathered last Saturday to further explore and form our identity as a regional unit.

Ms. Mutya Capuno facilitated an Appreciative Inquiry (AI) exercise that enabled the stakeholders to articulate what makes them feel a significant member of IVCF Metro, the factors that make IVCF Metro effective in ministry, and their shared hopes and dreams for the region. It gave the participants a perspective of the ‘what was’ and the ‘what could be’ for IVCF Metro.

Then to give the stakeholders a glimpse of the ‘what is’ they heard testimonies of how being part of IVCF Metro has made an impact from Markneel Balgos, SVCF student-leader; Paulo Bibay; GT volunteer for ISCF Roces HS; Joy, ISCF T. Sora NHS adviser; and Lanilyn Arlegui, IVCF staff.
Di Fernandez then took the opportunity to recognize and appreciate the faithful service of Lanilyn as Regional Director (RD) for the past four years. Lanilyn stepped down as RD last May 31 in order to give more time to her growing family. She remains with team as Graduate Staff and Administrative Support for Di, who took over as RD.

The Metrolink event was also a time to show appreciation to our ISCF counselors, GT volunteers, faculty advisers, graduate leaders and the members of the Working Committee for Regionalization who served with us last year. The region also thanked and sent off Charlie Jane Layao who served as ISCF MMRU Staff from June 2014 – July 2018.

Di gave a brief ministry overview of the campuses currently being reached, the focus for ministry this year, initiatives in both student and graduate work and ways that each one could take part in the ministry. She introduced the newly appointed MMRU representative to the IVG National Council, David Salva, the other IVG leaders – Ezra Sambrano, Jared Racaza, Roselyn Villaflor, and the new graduate initiative being led by Jon Solangon in the South of Metro Manila. She also presented the newly constituted Manila Leaders Council composed of Luzviminda Joy Verano (STI Global), Markneel Balgos (UPD), Danmark Valen (TIP-QC), Lyndale Joy Valen (PUP-QC), and Kristel Sapungan (TIP-QC). They were commissioned by Ms. Christy Jutare, IVCF National Director.

Pastor Dennis Merano, the Chairman of the Working Committee for Regionalization, wrapped up the event by encouraging participants to be as one in the goal of joyfully journeying together in the region.