The social Work Society is an established student organization at the Southwestern University in Cebu City. Being elected as its president is a big pleasure at the same time a pressure. It is a pleasure in the sense that I can serve other students, cater to what they need and especially become a witness of God’s astounding actions and of His glory. I have learned a lesson from one of my counselors which I always bring with me: “I am a Christian who happened to be a student, and not a student who happened to be a Christian.” So, it is a joy for me to serve others rather than to be served. Pressure also because I need to deal with the over-all population of Social Work students. I will lead in planning of what we should do to enhance their practices in the field of Social Work, and initiate to strengthen the relationship between each members.

The recent activity we did was conducting a Christmas Party for the less fortunate children of the Drop-in Center from Parian. This agency offers temporary shelter for turned-over street children. Organizing this event was so much hassle, time-consuming, energy-draining and somehow a struggle. It was tiring and I almost gave up. I was tempted to turn-over the leadership to the vice-president,. Suddenly, a voice whispered to me that this event is not just for the sake of the Society’s listed calendar of activities, nor to extend help to the children, but this is for God alone. I was reflecting and realized that I was using my own strength and I forgot to seek Him first. From that time, I was rectified and I prayed hard and asked God what He wants me to do for this event that would make sense for everyone.

It was a reminder for me to just rest on Him, and let His peace rule over in this event and in my life. He never fails when it comes for the exaltation of His name and glory. He sent people to give me ideas on what to do. I partnered with Inter-Varsity Christian Fellowship in delivering the message of the true meaning of Christmas and why Jesus was born. These children came from the streets where education and Christianity is their least priority. So the message hit two birds at one stone since there were other people like social work students, staffs of Drop-in Center, and visitors who, somehow, also do not know why we truly celebrate Christmas. During the event, I learned that these children are much vulnerable in our community. They can be used by other people in fulfilling their own needs due to their innocence. They lack a strong family – the foundation, that if present, could keep them from dwelling in the streets. These children, found in the streets, have different norms and behaviors. They usually don’t participate. They find it hard to trust people, even us during the event. I realized that one factor why they did not participate well in the activities we have prepared was a result of their past experiences from the people they have encountered, which later on became their abusers. In conclusion, it is our duty, (concerned individuals) to understand more than to judge them, for they have hidden stories in their lives that they hardly can share or tell to people in the community. To God be the glory! — 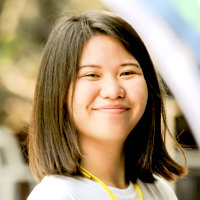