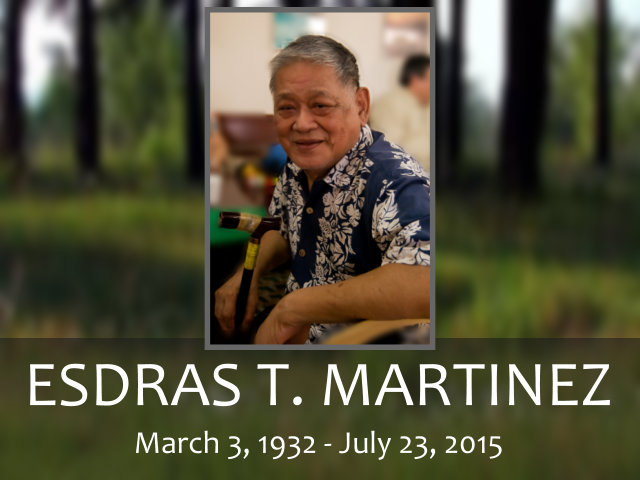 Manong Esdras was the first IVCF student and was a member of the first Bible studies that IVCF pioneer, Gwen Wong, conducted in the University of the Philippines. He was also member of IVCF’s first Board of Trustees and would later serve as its chairman. He taught in the University of the East where he was a long-time adviser of the IVCF Warriors Christian Fellowship.

Manong Esdras’ wedding to ate Edna in 1959 was also the first IVCF wedding. This IVCF couple has been integral to the growth of the IVCF ministry. They passed on their passion for serving God and their love for IVCF to their children Ezra, Shane and Michi and later on their grandchildren Tisha, Kyra and Mignon. Ezra’s widow, Armi, is currently on the IVCF Board.

We are deeply saddened by his moving on because as Manong Bel said, “IVCF owes much to Esdras.” Yet we know that Manong Esdras now enjoys full rest in the Lord.

IVCF will always be grateful to the Lord for Manong Esdras’ life of faith and legacy of service. We ask that He will comfort and strengthen ate Edna and the entire Martinez family.

We invite everyone to celebrate Manong Esdras’ life with the Martinez and IVCF family in a wake service tomorrow, July 25, Saturday at 7:30pm at the Arlington Memorial Chapels, Araneta Ave.